Minnesota a leader in biochar research and demonstration

"We see biochar as an important part of Minnesota’s economy of the future.” - Jeff Jackson, NRRI/UM Extension 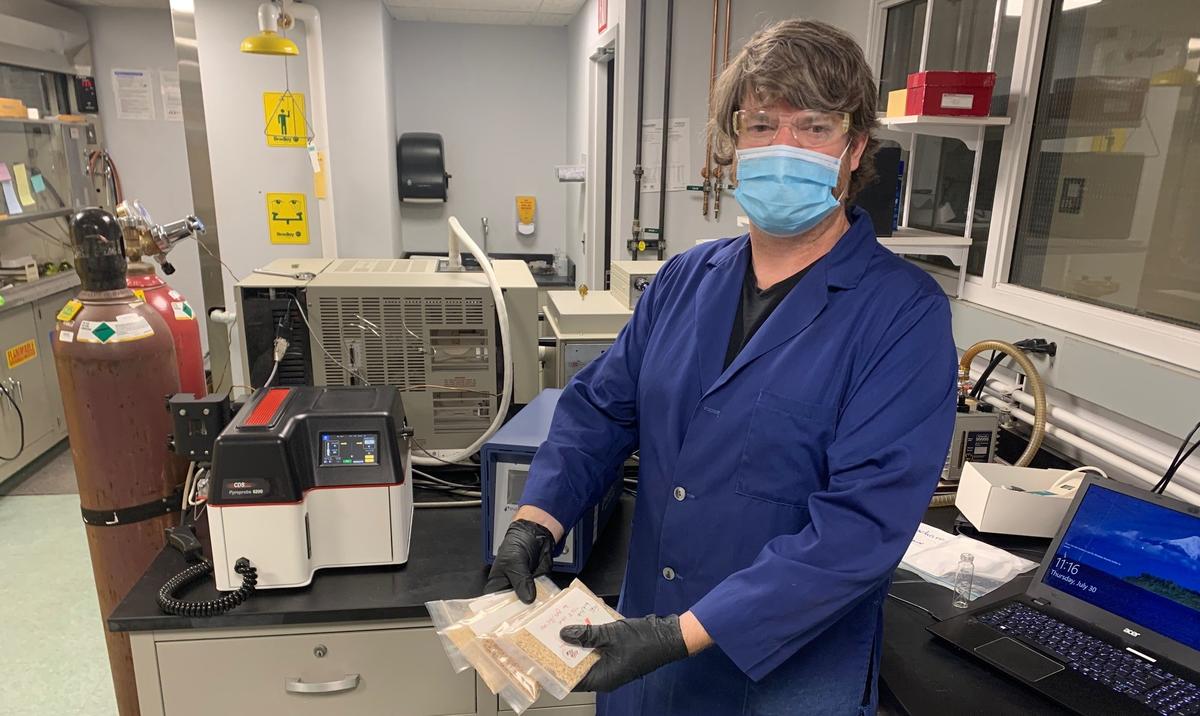 Biochar is gaining interest around the globe. NRRI is working to understand its potential for environmental remediation and as a new market for forest resources.

There’s a material that can be made from forest resources – like, ash trees killed by beetles or excess wood residuals – that can address a lot of challenges. This material filters harmful chemicals from stormwater runoff, enhances soil microbial health, increases soil drought resistance and stores carbon in soils to mitigate climate change.

The material is biochar and people around the world are looking into its benefits. NRRI is helping Minnesota take a leading role in studying, developing and demonstrating biochar’s potential, especially as a new market for the struggling forest products industry.

But there’s a challenge with biochar. On the surface, it seems so simple – heating wood to greater than 650°F with limited oxygen (a process called pyrolysis) produces a black, charred material that looks like coffee.

It’s not that simple. Just because biochars all look the same, doesn’t mean they behave the same. Different biomass inputs – varying tree species, agricultural waste, invasive plants – combined with varying pyrolysis temperatures and times results in biochars with a variety of attributes. There’s a lot of work to be done to understand what attributes are needed for which application.

That’s why Jim Doten, City of Minneapolis Environmental Services and Health, is grateful that NRRI is working to apply some science and engineering to biochar development. Doten has made Minneapolis a leader in biochar demonstration projects, garnering attention from other cities looking to incorporate it into environmental remediation and urban agriculture projects.

“We’ve seen biochar restore boulevard trees that are stressed from road salt, improve soils impacted by pesticide and herbicide use, filter E. coli and PFAS contaminants,” said Doten. “You first hear about it and think, maybe its snake oil, but it works.”

Finding new markets for Minnesota’s wood resources is a keen focus as paper manufacturing is in a steep decline, following decades of decline in other forest products. Carbon storage is also a major goal to reduce greenhouse gases. Effective filtering of pollutants from roads and industrial processes is another urban issue to address. And these are just the obvious potential applications for biochar.

“But you really have to understand the char and how to use it so you don’t have the wrong char for the wrong application. That’s what NRRI is doing,” Doten said.

“Where the research really lags is understanding how biochar is beneficial in soils, particularly the microbial process,” said Barry. “We know it holds onto water and slows down the leaching of nutrients, but the real benefit is likely in improving soil microbial health.”

NRRI’s Biomass Conversion Lab in Coleraine is a tremendous asset in moving this research forward. NRRI's large-scale pilot plant is able to produce tens to hundreds of pounds of biochar per hour depending on the type of biomass being processed and the targeted temperature.

Bridget Ulrich, NRRI environmental chemistry group leader, is working on several demonstration-scale projects to test biochar’s ability to remove contaminants from water. The Minnesota Pollution Control agency is funding research on developing a system to remove E. Coli from a contaminated creek in the North Metro area. Another project, funded by the Minnesota Stormwater Research Council in collaboration with the Mississippi Watershed Management Organization, is evaluating removal of various contaminants from parking lot runoff in a demonstration treatment system at the watershed organization’s research facility. A seed grant through the University’s MnDRIVE program is also funding a project in collaboration with Young Environmental Consulting Group to test whether incorporating biochar into biologs – typically used for erosion control – can also remove contaminants from water.

“In May 2019 Bloomberg Philanthropies invited our Minneapolis team to visit Stockholm, Sweden, which is leading the world in biochar applications,” said Doten. “That really got everyone on board.”

In June this year, a virtual meeting hosted by Carbon Neutral Cities Alliance was attended by 35 participants from the major cities of Minneapolis, Boulder, Colorado, Helsinki and Stockholm.

Minneapolis started using biochar to improve soil health in 2014. Recent projects include a 5-year study with the University of Minnesota to test biochar’s impact on tree growth and biochar compost in a road median landscaping project on Highway 55. This summer, 15 boulevards in the Tangletown neighborhood are being planted with pollinators in a biochar compost and biochar will be used in rain gardens to filter stormwater. Doten calculated that the Minneapolis biochar program can save as much greenhouse gas emissions as thousands of acres of forest.

To help advance this industry throughout the region, NRRI is building a biochar stakeholders network to define markets, opportunities and barriers. Jeff Jackson, who holds a joint NRRI outreach and UM Extension position, is working to identify people interested in developing the production of biochar and expanding markets. Once a large network is built, webinars, focus group discussions and a regional summit will follow.

“Innovative supply chains, like biochar, are built through relationships,” said Jackson. “So we’re going to build those relationships between researchers, policy makers, manufacturers and end users. We see biochar as an important part of Minnesota’s economy of the future.”