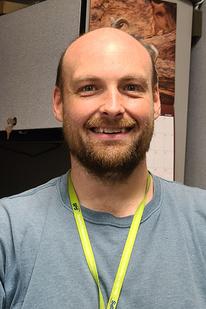 Adam has been a contractor for the EPA as an invertebrate taxonomist from 2012 to present. He works with all invertebrates but specializes in species identification of insects, freshwater snails, and Sphaeriidae pea/fingernail clams. Currently Adam is working on his research project to create a revised key for Sphaeriidae in the great lakes’ region by utilizing his taxonomic skill, artistic illustration, digital photographs, and DNA barcoding to create a more comprehensive key.

Adam has two certifications from the Society for Freshwater Science - Easter EPT (Ephemeroptera, Plecoptera, and Trichoptera) and Eastern General Arthropods. He has assisted in one publication that is still in process for The Great Lakes Entomologist, Schmude, K.L., G. Shepard, A. Frankiewicz, and A. Trebitz.  “First record of the Nearctic water boatman Palmacorixa janeae (Hemiptera: Corixidae) in the United States”.