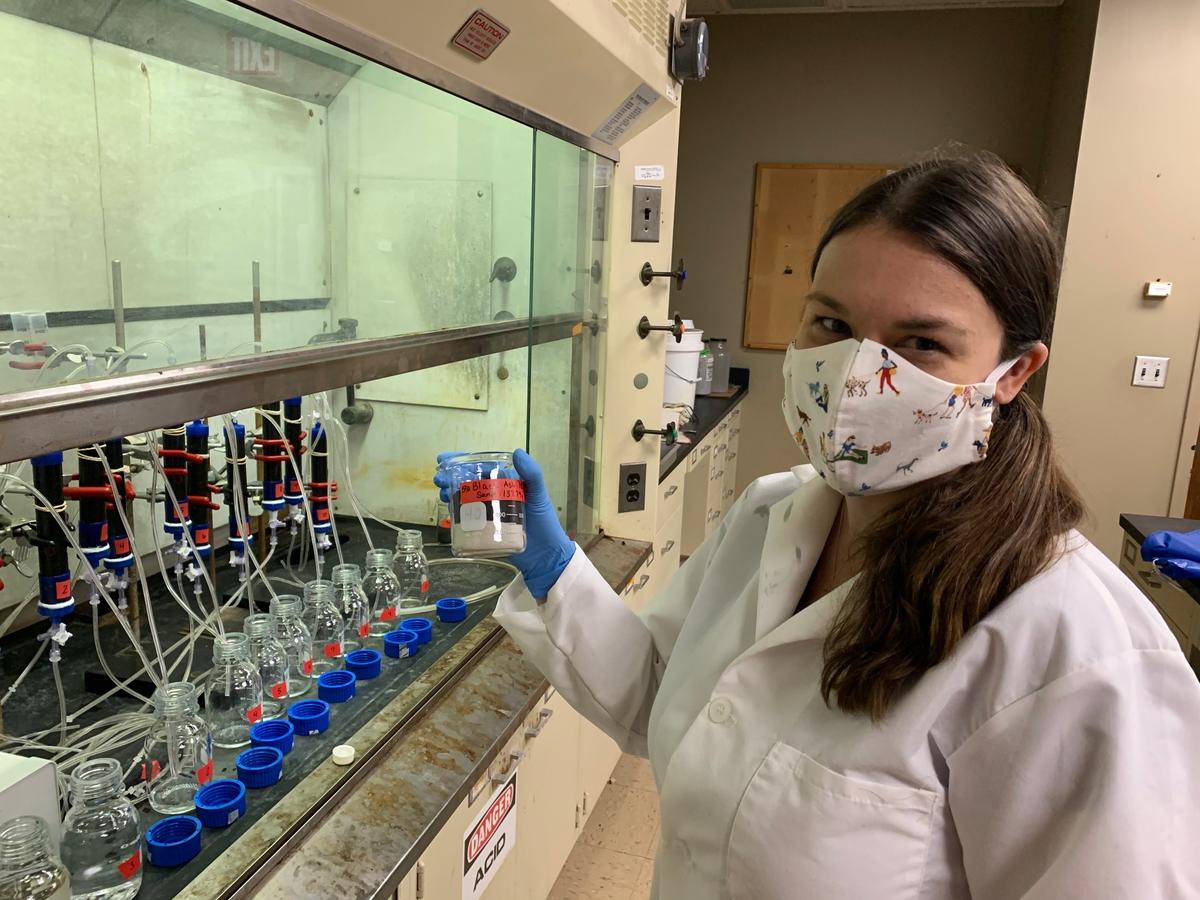 Contaminants in Great Lakes and biochar projects spur acquisition of interesting new tools to get the job done right.

Bridget Ulrich is going to help lead a team of scientists into the unknown. They’re setting out to discover what contaminants – both legacy and emerging – are lurking in our freshwater Great Lakes. All they need are scientific super powers.

NRRI is investing in top-end analytical Instrumentation that will allow Ulrich and other researchers the ability to analyze known – and even unknown – chemicals. Two mass spectrometers are being installed for Ulrich’s role in the Great Lakes Sediment Surveillance program awarded by the U.S. EPA in September.

A Liquid Chromatography Quadrupole Time-of-Flight High Resolution Mass Spectrometer will allow the researchers to acquire a snapshot of the complex mixtures of compounds present in environmental samples, not just the ones that we already know to look for.

“Sometimes chemicals break down in the environment and form new compounds, or sometimes there are unknown commercial chemicals – mixtures we don’t know about – that get into the water,” Ulrich explained. This equipment will be used to analyze emerging contaminants like pesticides, PFASs (known as “forever chemicals”) and pharmaceuticals.

This sediment survey program will lead to new understanding about what is controlling the way the contaminants are dispersed in the sediment and how they impact the ecology of the lakes.

Another grant awarded by the U’s Office of the Vice President for Research’s Research Infrastructure Investment Program will bring a new wave of material characterization equipment to NRRI. Ulrich is working with NRRI Chemist and Program Lead Brian Barry to develop biochars and activated carbon to filter specific contaminants from water, which requires measuring microscopic pores on tiny granules.

For this, NRRI will acquire a Surface Area Analyzer and a Mercury Porosimeter. The Surface Area Analyzer does just that – analyzes the surface area of a material – by measuring the amount of gases that physically adsorb to a sample. This technique targets pores as small as 2 nanometers – 20,000 times smaller than the width of a human hair. The Mercury Porosimeter also has a descriptive name – it uses mercury instead of gas – and can measure materials with slightly larger, though still microscopic, pores. This equipment will be shared with Swenson College of Science and Engineering.

“Contaminants need to make their way – or diffuse – through the pores to find a site to absorb,” Ulrich said. “Think of the pores being like streets, roads and highways – micro, meso and macro pores – the bigger the pore, the faster the diffusion.”

Knowing the surface properties of the various materials will allow Ulrich and Barry to understand how the charred materials will behave in a variety of applications.

“I’m excited about the potential benefits of biochar as a soil amendment for agriculture, like improved drought resistance and soil microbial health,” Barry said. “Biochar production also results in carbon sequestration and could be offered as a carbon offset credit mechanism.”

Barry has the challenge of preparing the charred materials and analyzing the byproducts at the bench scale. To do this, his lab acquired a pyrolysis unit (Pyroprobe) which will couple to both gas chromatography-mass spectrometry and micro-gas chromatography instrumentation. It will complement NRRI’s larger pilot-scale equipment in the Biomass Conversion Lab where biomass is being heated in a low oxygen environment under numerous conditions to generate a variety of products.

“Having the ability to quickly generate data on the bench-scale is very helpful for informing the decisions we make for larger scale productions,” said Barry.