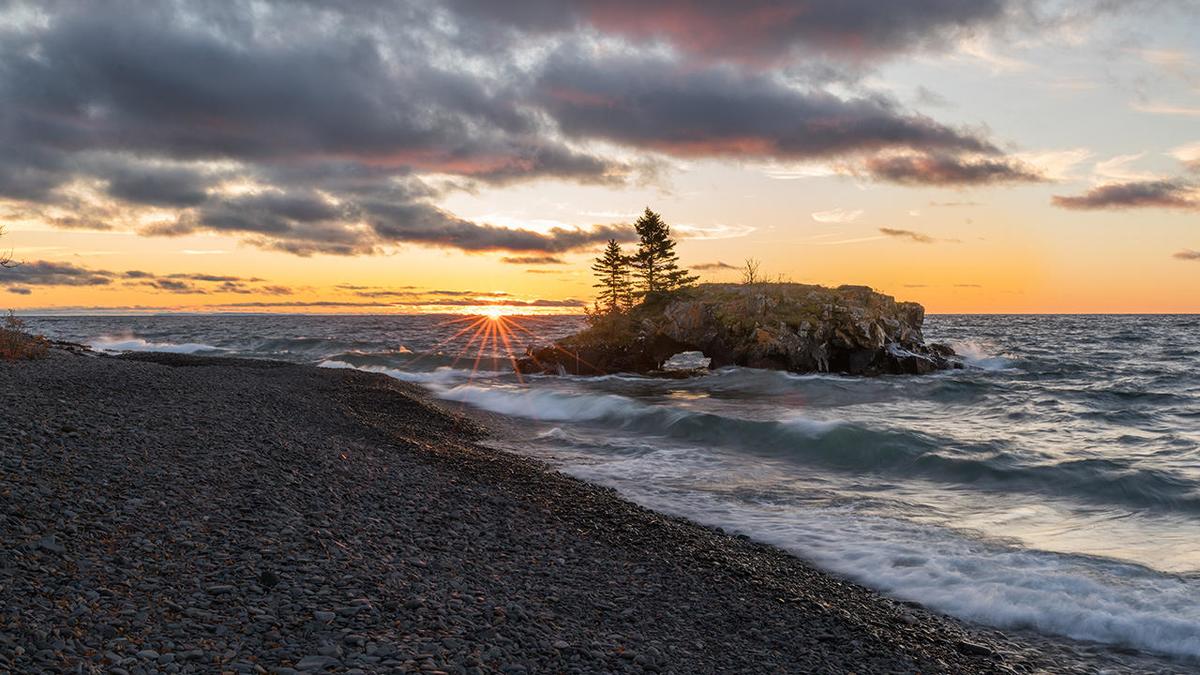 From its formation in the early 1980s to today, NRRI has collaborated across the institute, the University and the globe to contribute to Great Lakes understanding.

Carved from glaciers and filled with their melting water, lakes Superior, Michigan, Huron, Erie and Ontario make up the largest freshwater system in the world, with shorelines longer than the East and Gulf coasts combined.

And while researchers studied the lakes’ fisheries and deep waters, the coastal and nearshore waters were not so well studied. This changed 20 years ago when the Environmental Protection Agency launched a program to study coastal areas across all of the United States’ coastlines. The obvious ones -- Pacific, Gulf, Atlantic -- but also the Great Lakes.

NRRI scientists huddled, brainstormed and proposed an ambitious program to develop bioindicator “tools” for assessing the condition of the coastal zones across all five Great Lakes. It had never been done.

From 2001 to 2016, terabytes of data were collected, some 100 peer-reviewed papers published and countless metrics and methodologies developed. Out of this effort, standardized methods were developed to assess the condition of the entire Great Lakes shoreline. The first GLEI study used mostly biological indicators -- algae, bugs, fish, birds, amphibians, plants and contaminant levels -- to assess coastal ecosystem health and identify causes of impairments. It was a much needed step forward in understanding this valuable system and spawned many other studies.

“Even before GLEI, NRRI had a reputation for monitoring and data collection in lakes and streams across Minnesota,” said NRRI’s Lucinda Johnson, associate director and water research lead. “Not only do our scientists put boots on the ground -- or in this case, waders in the water -- we translate data to answer questions and provide needed information to resource managers.”

The success of GLEI launched GLEI 2 in 2010, collaborating across the border with Canada. And from there, NRRI’s Great Lakes research expanded to advance freshwater science for state and federal agencies to inform resource decision-making for this great glacial gift.

So how can those reams of data be made more user-friendly? NRRI scientists were early adopters of computer technologies that translate data into maps. Out of the Indicators project, scientists discovered -- with unprecedented precision -- exactly where, how and what impacts humans have on the health of the Great Lakes watershed and its coastal waters. And with that information, NRRI used Geographical Information Systems (GIS) to develop environmental threat maps. At a glance, the maps allowed immediate understanding of how environmental stressors -- agricultural runoff, dense human population, invasive species -- are shaping the state of the ecosystem.

“Our entire study design was built around the premise that if we understand the full range of the human footprint, we can measure the biological impacts corresponding to that footprint across that gradient -- from the best of the best to the worst of the worst of conditions,” explained Johnson. “Those ‘indicators’ are shorthand for the condition of the ecosystem.”

Given the scope and scale of the Great Lakes coastline, much of this work couldn’t have been done without advancing technologies, like satellites. NRRI was able to gather detailed information about submergent vegetation across all five lakes that had never been mapped before. This clearly showed the spread of aquatic invasive plants and impact to native plants.

In a unique partnership, NRRI scientists used NASA satellite systems to gather data in even the most remote locations. Basin-wide maps were developed showing 207 different variables, such as where sediment and nutrients were entering the Great Lakes from the watershed.

A large and looming threat to the Great Lakes wasn’t included in the early 2000’s GLEI project -- climate change. At the time, it wasn’t clear how quickly and profoundly the warming world would impact the Great Lakes.

Today, NRRI scientists can use the GLEI data to see increases in bacteria and harmful algae blooms, and document changes in water levels that impact the coasts and shipping channels. Increased frequency and intensity of storms also send pollutants into the lakes, impacting water quality. 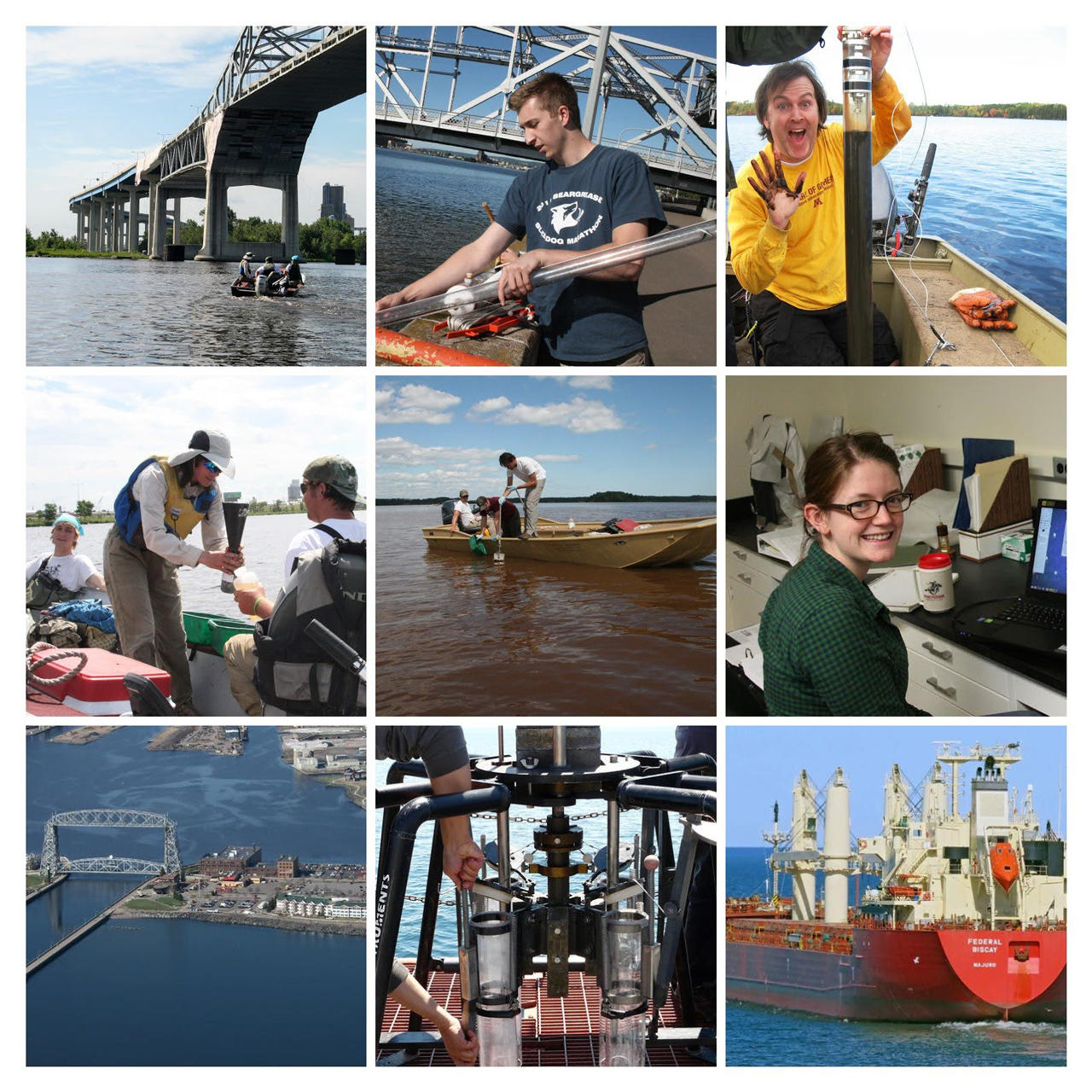 Sometimes change is imperceptible to the casual observer. How do scientists know when an ecosystem is impacted? Noting changes in aquatic flora and fauna is key. Each year, with funding from the EPA and other agency partners, NRRI scientists collect data on the population changes of algae, bugs, birds, amphibians and plants that depend on Great Lakes’ freshwater resources. Changes to which species are present and population increases or decreases signal environmental change, often due to human activities and climate change.

Even the tiniest creatures signal big changes. EPA funding allows NRRI’s ecologists to compare microscopic algae found in today’s lakes with those in the sediment hundreds of years ago to understand human impacts on the Great Lakes since European settlement. Recently, warmer-water species started showing up in cold Lake Superior, revealing the first known biological impact of warming temperatures in the lake.

Another indicator of a changing ecosystem are the plants and wildlife that live in the Great Lakes coastal wetlands. NRRI is a co-leader of the Great Lakes Coastal Wetland Monitoring program, which grew out of GLEI and the companion Great Lakes Coastal Wetland Consortium. The first two projects created the background research necessary to implement a long-term program to monitor the health of coastal wetlands across the whole Great Lakes using aquatic invertebrates, fish, birds, amphibians, wetland vegetation and water chemistry. This monitoring program samples one thousand coastal wetlands every five years, now in its third cycle.

“Eighty percent of recreationally important fish species -- fish that humans want and need -- in the Great Lakes use wetlands at some point in their lifecycle. They’re so important,” explained Johnson. “But because of the shallow and vegetation-rich environments of wetlands, they’re hard to get to for research. And that’s likely why they’re so understudied.”

The loss of some 50 percent of Great Lakes wetlands over the decades impacts bird species, too. Over the past 30 years, NRRI ornithologists annually count birds in Great Lakes wetlands to monitor increasing or decreasing populations. Among their findings are increases in double-crested cormorants, ring-billed gulls, and Caspian terns, while populations of common terns and black-crowned night herons have been declining.

Along with temperature increases, more big storm events due to climate change can cause excessive nutrients to flow off the land and into the Great Lakes, especially in agricultural areas. On Lake Erie, NRRI scientists studied how invasive mussels have changed the way nutrients cycle, exacerbating algal blooms and causing extreme oxygen depletion in the summer. Aside from threatening all life that requires oxygen in those deep waters, low oxygen in the bottom of the lake causes the release of even more nutrients from the sediments, making the problem even worse.

Another problem is the threat to fisheries by aquatic invasive species – tiny critters like spiny water flea and quagga mussel -- that disrupt fish food sources. In the Great Lakes, NRRI plays a leading role in testing the effectiveness of technologies that are built to kill off these little ship ballast invaders before the water is discharged in another port.

With increasing numbers of invasive species and habitat loss, maintaining biodiversity is doubly challenging. NRRI led a study of fish biodiversity in the Great Lakes which showed hotspots of diversity as well as 'bright spots' -- where species diversity is high in spite of human stressors. These ‘bright spots’ and hotspots indicate high resilience and conservation potential.

Even with all the research taking place, there’s still a lot to learn. For example, the amount of legacy and emerging contaminants in the sediment of the Great Lakes is still unknown. Starting this year, NRRI scientists are leading the Great Lakes Sediment Surveillance Survey for the Environmental Protection Agency. NRRI researchers will collect samples and analyze over 250 different contaminants across the entire Great Lakes system.

Chemicals showing up in water supplies, like PFASs, are widely used in consumer products such as nonstick cookware and grease-resistant food packaging. Elevated levels of industrial chemicals -- mercury, PCBs and DDT -- have been detected in shorebirds, according to studies by NRRI ornithologists.

NRRI also plays an ongoing role in monitoring the restoration efforts in the St. Louis River Estuary which feeds into Lake Superior. In 1987 it was designated as one of 43 Areas of Concern on the Great Lakes by the Environmental Protection Agency. Efforts to remove that designation have required meeting targeted goals -- like, restoring fish populations and improving wildlife diversity. Many NRRI scientists have also been involved in committees that oversee the restoration process.

Starting in the early 2000s, NRRI researchers realized the opportunity and power of websites as an information dissemination tool. DuluthStreams.org (currently being redesigned) was developed in 2001 to share information about the watershed that feeds into Lake Superior. The site included data management, decision modeling and data visualization tools, so that changes to water quality could be easily monitored in real time. Through 2020, DuluthStreams.org generated 69 million successful server requests. It is now in the hands of new managers who plan to modernize the site. That early effort led to many other web-based tools developed to share freshwater information about the St. Louis River estuary and Lake Superior beaches. NRRI researchers even expanded their web reach with data sites about great lakes around the globe, like Baikal in Russia and Victoria in Africa. 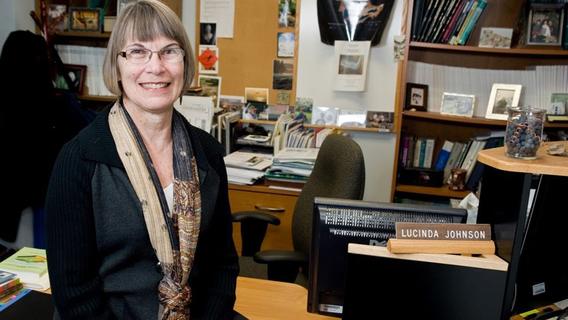 NRRI’s long time leader in water science, Lucinda Johnson, is a sought-after advisor on many Great Lakes-related committees. Notably, she has served on the International Joint Commission’s Science Advisory Board and continues an active role in this U.S. and Canada Great Lakes cooperative management commission. In 2021, Johnson was appointed to the Minnesota Governor’s Advisory Council on Climate Change.

“Being at the tip of the deepest and cleanest of the five Great Lakes here in Duluth, we consider it a special responsibility to protect these important freshwater resources for future generations,” said Johnson. “The long term data sets collected over the decades allows our researchers to identify trends and help predict and manage future threats and stressors.”